(Notes From The Trenches) 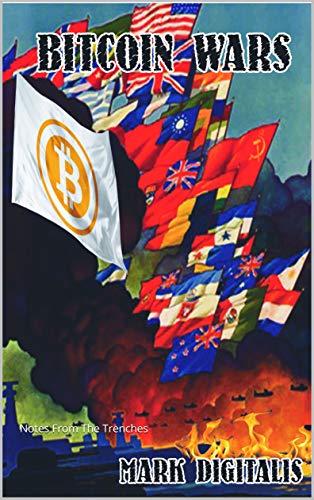 BITCOIN WARS documents the struggles of a digital currency against the forces that would destroy it. and how it has grown stronger as it has fought its way across the digital battlefield, fighting off attacks from The Media, Governments, Copycats, Hackers, Bankers and other would be assassins to emerge as a survivor, a warrior and a force to be reckoned with.

Throughout history there have been moments where the understanding of money has shifted in the consciousness of society. These shifts have moved vast amounts of wealth between nations, out of the hands of generational wealth and into those of unrecognizable characters. With each shift comes the convergence of government agencies, international bankers, high profile individuals and a new breed of industry magnates all jostling for position to make their mark and secure their place at the table.
Bitcoin was invented in the aftermath of the 2008 financial crisis, and the crisis was a clear motivating factor for its creation.
Numerous

“Whosoever controls the volume of money in any country is absolute master of all industry and commerce …and when you realise that the entire system is easily controlled by a few powerful people at the top you will not have to wonder how periods of inflation and depression originate” – US President James Garfield.
Two weeks after making this announcement he was assassinated purportedly by a killer hired by the Rothschild family.

Thomas Jefferson stated that “The Central Bank is an institution of the most deadly hostility existing against the principles and form of our Constitution…I believe the banking institutions are more dangerous to our liberties than armies. The issuing power should be taken from the banks and restored to the people to whom it properly belongs. If the American people ever allow the banks to control the issuance of their currency the Banks and then the Corporations that grow up around them will deprive the people of all property until their children wake up homeless and penniless on the streets”

Neither of these prophetic statements have been listened to as the citizens of America and the rest of the world follow a path to their own doom built of debt and lies and like moths to the flame blinded by the empty lights and false promises of Capitalism.

This 112 Page book is packed with information about Bitcoin, the reasons for its inception , how it works and why you need it.

Get Your Copy Today

You may have missed

The next big treasure: Corporations buy up Bitcoin as a treasury reserve

2 days ago currncy
CURRNCY.io THE HOME OF FOREX AND CRYPTOCURRENCY INFORMATION we also use cookies to improve your experience. We'll assume you're ok with this, but you can opt-out if you wish.Accept Read More
Privacy & Cookies Policy
Necessary Always Enabled